Alltech Symposium: Debate on how to feed 9 billion people by 2050

Sean was one of four experts that took part in The Great Debate held during The Alltech 28th Annual International Symposium in Lexington, Kentucky, USA.  The debate cut through the hyperbole to get to the heart of what really matters when trying to feed a population of 9 billion people by 2050.  Sean explained that a key driver of meeting the world’s demand for food was the ability of getting science and farmers together.

Alistair Driver reports in Farmers Guardian,  Promoting organic farming as a solution to the food security problem  is ‘morally impossible’, outspoken consultant Sean Rickard told the CropWorld Global 2011 conference.   He claimed the organic movement, which accounts for 1.4 per cent of food sales in the UK, was having a disproportionate and damaging influence over how farmers operate in the UK and Europe.   In the UK we consume as much cat food as organic food. Yet a small minority are holding back science and technology, which is surely what the whole industry depends on.

Genetically Modified Crops could be accepted in Europe within 10 tears

This was the prediction of Sean Riackard speaking at the British Potato 2007 conference in Harrogate.   Biotechnology is the next big technology driver in the world and the only way we can respond to the challenges of climate change is through GM.   It is of our government that we now lag behind the rest of the world.   But the government has not dismissed the technology completely and public acceptance is increasing.   In the next two or three years consumers will be prepared to experiment with GM and once the stances of consumers and supermarket change things will move rapidly.

Sean’s classes were a highlight of my MBA studies. Always packed with original thoughts,the knowledge was imparted with a genuine concern for the learning and some levit.

A fantastic, engaging and challenging professor of economics to those MBA students lucky enough to have learned from you.

THE ECONOMICS OF ORGANIZATIONS AND STRATEGY (PAPERBACK) 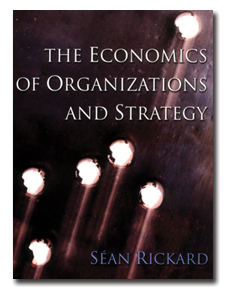